There was a time when we knew what type of weather to expect here in the UK dependent largely on the time of year. As a country with a seasonal climate, the four seasons were something we identified with and understood in terms of gardens, clothing, sporting activities and so on. However we are more and more experiencing changes to what we might expect throughout the year with heavier and more persistent rainfall and milder weather when we least expect it.

If you consider where we sit on the globe, the UK has a milder climate than other countries sharing the same latitude for example parts of Canada, due in part to the fact that we are surrounded by water but also thanks to the North Atlantic drift of the Gulf Stream. The factor that affects our weather though is the jet stream. There are four in total and recently they have been in the news quite a lot in association with the extreme weather conditions experienced in various parts of the world.  Think rainfall and flooding that we’ve seen in parts of the UK over recent years. Think also global warming because they are being scientifically scrutinised for possible connections to some of the bigger concerns for the planet.

The jet streams are bands of wind hundreds of miles wide and thousands of miles long that rings the planet and moves the weather around. At around 9 to 16 kilometres above the earth and reaching speeds of up to 200 mph, the jet streams have gotten a great deal of media and scientific attention lately, surrounding recent weather extremes and their possible connections to global warming. 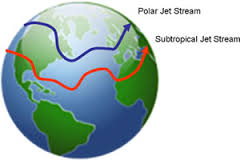 So what’s happening to them?

Poor weather conditions can impact contractually in the construction industry if lengthy delays occur. To prove the delay was weather driven, current condition needs to be compared to weather conditions in previous years using data from the weather station closest to the site. Even then it’s not a simple matter to prove.

Recent information released about the UK economy, states that UK construction output fell in November slowing down predicted growth in GDP during the last 3 months of last year compared to that previously forecast. Poor weather was cited as the major cause.

There are also safety issues to consider; The Occupational Safety and Health Act requires employers to provide safety training and personal protective equipment (PPE) to their workers that are adequate in addressing the environmental hazards they are exposed to but at times even this can be seriously challenged by poor or extreme weather conditions. These challenges may include extreme heat, extreme cold, rain, ice and strong winds.