Things you may already know…

Nantwich hosts its 18th Jazz & Blues Festival over the Easter weekend starting on Thursday 17th right through to Sunday.

The event attracts many thousands of visitors to the town to participate in a festival of music held across numerous venues including the Civic Hall and many of the town centre pubs and restaurants.  An entry ‘wristband’ is needed for admission into many establishments but often with no further payment to enjoy the music on offer. However other organised events do require tickets for admission.

The event which started as a relatively small musical affair is now a major calendar event for visitors and businesses in the town. Full details of performances and ticket sales can be found through the Jazz Festival site.

And things you may not…

The town of Wich is noted in the Domesday Book in 1086 as having a salt pit and salt pans. It has endured a great many trials and tribulations and was flattened during the Norman Conquest.  It was known by neighbouring Welshmen as Hellath Wen – ‘town of white salt’ and was invaded by them in 1150. In 1245 the town was destroyed by King Henry lll to deny the Welsh access to the salt pits. The town endured many more attempted invasions but a greater catastrophe managed what the Welsh couldn’t. 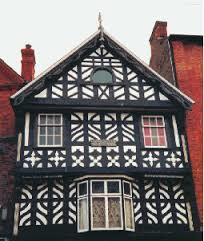 The town was burned to the ground in the Great Fire in 1583 on 10 December with half the population made homeless (about 900) with the destruction of 150 houses, inns and buildings. This included much of Hospital Street as far a Sweet Briar Hall which remains to this day, along with Churches Mansions. The Crown Inn – very much involved in the Jazz Festival – was burned to the ground and rebuilt 2 years later. It is very much a part of historic Nantwich, though no longer as an important coaching inn on the route from London to Wales and Ireland.

Thanks to the intervention of Queen Elizabeth l who launched a nationwide collection of funds, to which she donated £1000 (today worth £165,000), the town was rebuilt to continue as an important military staging post and salt producer (the best means for preserving in the days before refrigeration). The Queen’s generosity is marked by a plaque on the building known as ‘Queens Aid House’ and also a plaque on a plinth in the Waterlode that marks the start of the fire. 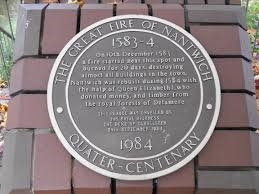 Nantwich historically has had a far from easy life but an interesting one – the Battle of Nantwich occurring in January 1644 yet another landmark occasion celebrated by Holly Holy Day each year.  We are nothing if not survivors!

So, if your visit to the Nantwich Jazz & Blues Festival is your first to the town, perhaps come back another time to enjoy our fine historic buildings and learn a bit more about the Dabbers!