The UK produces somewhere in the region of 67% of the food we buy. The agricultural industry is often ‘up against it’ as far as viable business goes, with a multitude of issues to contend with. It appears however that globally, we need to feed 9 billion people by 2050, so perhaps it’s not a bad sector to be in longer term, because increased consumption could be the key to economic growth, and if statistics on waste are to be believed, even if we don’t eat it or need it, we’ll still be buying it.

After the Second World War ended in 1945, there were several years of food shortages resulting in food rationing in the UK. That’s why our older generations perhaps appreciate the food on their plate and in their refrigerators, more so than those who have grown up with a more relaxed view of what gets thrown away – influenced no doubt by retail trends of buy 1 get 1 free, 50% extra free and so on. It comes as no surprise then, that globally, we throw away more food than packaging, and that growing and transporting food around the world, accounts for somewhere in the region of 3 billion metric tonnes of greenhouse gas.  Shockingly 40% of food in developing countries is lost through either environmental or logistical reasons but yes… there are still starving children in the world.

It’s not just that we buy 7 million tonnes of food and throw it away – in the UK this waste equates to about £700 annually for a family of four – our retailers are equally guilty. One of the larger supermarkets admitted that they had 28,500 tonnes of ‘waste’ disposed of in the first 6 months of last year due to the ‘sell by date’ system. There are disadvantaged people who try to make use of the surplus by taking from food from skips (known as ‘skippers) and those who do it on a point of principle to highlight the cause for action. Either way, in the UK you can be prosecuted for taking food from a bin under the 1824 Vagrancy Act. Let’s not forget hotels, restaurants, hospitals and other food providers who along with the rest of us, contribute to the 30% annual food waste. Apart from the moral issues surrounding this whilst people go hungry, and the economic impact on our pockets, there are also massive environmental implications in the disposal of it, with costs often passed on to consumers in higher prices and through local taxes for landfill. 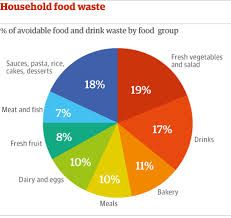 It’s real and it’s here! A recent study commissioned by DEFRA and carried out by the University of Warwick, found that food insecurity is difficult to track in the UK as many households adopt a range of tactics to avoid asking for help – it appears there is a stigma attached regardless of the often very genuine and unavoidable reasons for it. Asking for help can be a last resort – so it’s not just the homeless we might find ‘skipping’ outside supermarkets.

On a positive note…

There are people of good sense and conscience who are trying to tackle these issues by taking excess food and redistributing it through proper channels. Organisations such as Food Cycle who since 2009 have reclaimed 97,000 kg of surplus food saving 388,000 kg of CO2 emissions and importantly, feeding people at risk of food poverty and social isolation. Or FareShare where up to 51,000 people a day benefit from food provided by them through various distribution schemes – again preventing waste, reducing carbon emissions and fighting food poverty right here in the UK.  It appears  we are getting better with a reduction in food waste of over 1 million tonnes in the last few years – that’s 23 million wheelie bins worth.

So the next time you’re food shopping and tempted by that ‘offer’ for something you don’t really need or when you ‘re putting enough food on the table to feed an army, when in fact you ‘re only feeding four – remember that 1 billion people somewhere in the world are going hungry.

save energy, save money, save our world