With so much flood water still around this may be the last thing that many people want to consider but… the UK could possibly be the world’s first site for energy generated from a Tidal Lagoon. The plot has been identified in Swansea and a building application submitted. The six-mile-long U-shaped seawall will be constructed to run from Swansea docks through to a site close to Swansea University’s new Fabian Way campus. It would be a 2 year build with the potential for 1,850 construction jobs. In addition there is an anticipated 60 long-term operational jobs with the possibility of approximately 90 more linked to visitor spending. 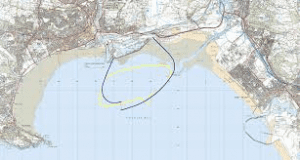 The company in question Tidal Lagoon Power Ltd (TLP) suggests that the 9.5kilometre site would capture renewable energy sufficient for powering 120,00 homes for the next 120 years. It could also save 216,000 tonnes of carbon a year. As part of the project, TLP state that this would provide spending locally, of 65% of its expenditure. They also have ambitious plans to expand their business across the UK to eventually supply 10% of our domestic electricity over the next 10 years. The project also includes the reintroduction of the native oyster to Swansea Bay, an oyster-shaped offshore visitor centre and national triathlon and water sports facilities.

In the UK we have the second highest tidal range in the world – we wouldn’t doubt it given the last few months – harnessing energy from this type of resource sounds like good economic sense, is great environmentally and, if the application is successful, could be providing power by 2018. To reach their target would require a further 4 lagoons with the scale of opportunity being compared to that provided through nuclear power – if this works then the UK investment could run into hundreds of millions of pounds for UK industry and of course, coastal communities. The time scale of 2023 also means that Tidal Lagoons would be providing energy before we see any provision from new nuclear.

The lagoon would involve an impounding ‘breakwater or seawall’ that would be capable of holding a large amount of water that would eventually be let out through turbines at high and low tide which would generate electricity. The tidal flow would bring sea water into the lagoon at high tide and back out again at low tide. The method of clean reliable energy has been around a long time and been promoted by governments and environmentalists but has only seen small scale tidal stream projects.

And the downside is?

Not sure there is one. An island nation making great use of its natural resources sounds like good sense. A water professor from Cardiff University sees this as an exciting time for Wales and suggests that the scheme could also be developed in North Wales, where massive flooding problems are going to require heavy investment in either flood defences or, perhaps more sensibly, building lagoons. He also stated that building lagoons would protect risk areas so for example, one built around Bridgewater Bay would solve the problems currently devastating the Somerset levels with the water running of the levels into the lagoon.